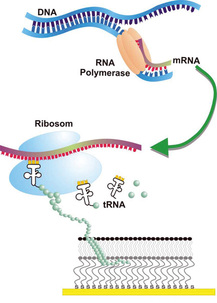 D2.3 Investigate and analyze the cell components involved in the process of protein synthesis, using appropriate laboratory equipment and techniques, or a computer simulation

D3.2 Compare the structures and functions of RNA and DNA, and explain their roles in the process of protein synthesis

D3.3 Explain the steps involved in the process of synthesis and how genetic expression is controlled in prokaryotes and eukaryotes by regulatory proteins *

Effective hooks regarding protein synthesis and the central dogma 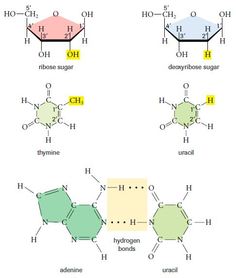 Remember DNA is in the nucleus and cant leave – so how does DNA get to the ribosomes? 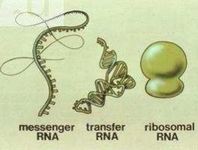 1. Messenger RNA (mRNA):
     Carries genetic information from DNA in the nucleus to the cytosol.
Once the mRNA is in the cytoplasm, it moves to a ribosome.

2. Transfer RNA (tRNA):
  Takes amino acids from cytosol to the ribosomes to be assembled
into a protein

3. Ribosomal RNA (rRNA):
  Makes the ribosomes where proteins are made. It binds the mRNA
and uses the instructions to assemble the amino acids in the correct
order.

1. Transcription
2. Post-transcription modifications
3. Translation
4. Post-translation modifications
Review Animation
This is an excellent animation that goes through the entire process of protein synthesis step by step with very simple explanations of each step. This is an excellent overview of the material that will be covered later on in more detail. 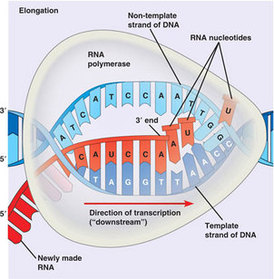 The process by which the DNA message is copied into a strand of mRNA is called transcription.  This mRNA is then used for the construction of a protein molecule.

Transcription takes places in the NUCLEUS because DNA cannot leave.

mRNA carries the instructions that direct the assembly of a specific protein to a designated area on the ribosome. The instructions are carried in a sequence of three nitrogen bases called a codon.

1. Initiation
2. Elongation
3. Termination
Protein Synthesis BINGO
This link shows certain definitions on flashcards that can be given to students in order to review the important terminology covered in this unit, or in order to make this more interesting and engaging for students, you can create a modified BINGO game. Create a 4x4 table that takes up approximately an entire page and get the students to write down the terms from a provided list into the boxes. While reading out the definitions, the students have to identify the term and circle it if it appears on their "whiteboard". The rules can be modified, but whoever get's a full line can win a prize of some sort chosen by the teacher. This activity can be appropriate throughout the unit, as a diagnostic or review activity of all terms learned throughout the unit. This can also be modified so all terms regarding transcription are chosen, or all terms regarding translation, etc. This can essentially be done for any topic in any course. 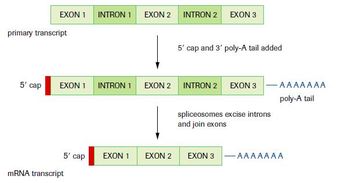 Fisher Protein Synthesis Review Kit
This is a hands on manipulative to teach the process involved with protein synthesis. The kit would need to be purchased (or made by the teacher). 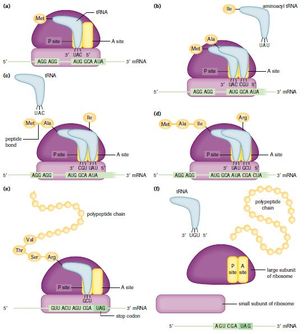 Once the message has reached the ribosome, the protein is ready to be assembled.  The process of building the protein from the mRNA instructions is called translation.  The transfer RNA (tRNA) and the ribosomal RNA (rRNA) are involved in translation.

In the cytoplasm, a ribosome attaches to the strand of mRNA like a clothes pin clamped to a close line.

tRNA is responsible for carrying the amino acid acids (the building blocks of proteins) to the ribosome so they can be linked in a specific order that makes up a single protein.  Each tRNA attaches to only one type of amino acid (correct translation of mRNA depends on the joining of each mRNA codon with the correct tRNA molecule).

How does this happen? One end of the tRNA carries a three-base sequence called an anticodon, which matches up with a particular codon on the mRNA.  They are complementary to each other.

1. Initiation
2. Elongation
3. Termination
Spongelab Games
Spongelab is an online learning platform with science simulations, games, and activities integrated into curriculum and provides game-based learning to students.
Online Interactive Protein Synthesis Review Activity
This is an online interactive process whereby students can practice transcribing and translating a segment of DNA in a way that they can visualize the entire process step by step. The activity does not allow for the students to continue until they have the correct answer, so this is an excellent activity to incorporate during the unit in order to visualize the process and further solidify their understanding.
James Bond Cellular Spy (Protein Synthesis)
In this activity, the students will more fully understand the process of transcription and translation by becoming part of the cell. The students will be cellular spies and will be given a mission to secretly crack a DNA code. This is a very interactive activity, and will get students up and out of their seats in order to complete the assignment which is excellent for both the kinesthetic, visual, and interpersonal learners in the class. 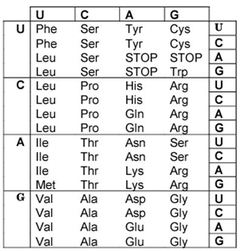 Protein Synthesis Sentence Activity
This activity is an excellent activity that students really enjoy. This can be done in partners, or individually. Depending on the classroom layout you can print off the codon-word pairings and tape them around the room for students to hunt down, or you can print them off in a table like the genetic code and hand that out to students as well. Or, you can also cut out the codon-word pairings and have the students physically put them in the sentence order. Instead of creating boring protein strands, they end up completing amusing sentences that can then be evaluated. This assignment would be best completed after students have a firm grasp on codon and amino acids and the genetic code.
Transcription and Translation Worksheet
This is a copy of the blackline master worksheets for students to transcribe and translate a gene. To make this more advanced, you could provide the students with a longer and more complicated DNA sequence and tell them to excise a certain number of base pairs (an intron) from the transcript before they continue and translate the mRNA into protein.
Creative Expressions of Protein Synthesis Activity
This website outlines a group assignment that can be completed by students in pairs or in groups of three where they must create a moveable model of protein synthesis depicting all processes involved. This can be done using physical materials and students are encouraged to be extremely creative with their ideas, however, students can also create a video, story, or poem as long as it is done in a creative manner. These models can be presented to the class orally and students must explain the process using their model. I would assign this as a culminating task at the end of the unit as a consolidation of all that was learned.

Transcription - process by which DNA is copied into mRNA
Translation - process by which RNA makes protein
Amino acid - the monomer unit of a polypeptide chain that is composed of a carboxylic acid, an amino group, and a side group that differentiates it from other amino acids
Codon - sequence of three bases in DNA or complementary mRNA that serves as a code for a particular amino acid
Anticodon - group of three complementary bases on tRNA that recognizes and pairs with a codon on the mRNA
Gene - a sequence of nucleotides in DNA that perform a specific function such as coding for a particular protein
RNA polymerase - enzyme that transcribes DNA into complementary mRNA
Upstream - region of DNA adjacent to the start of a gene
Promoter - sequence of DNA that binds RNA polymerase upstream of a gene
Template strand - the strand of DNA that the RNA polymerase uses as a guide to build complementary mRNA
Primary transcript - mRNA that has to be modified before exiting the nucleus in eukaryotic cells
5’ cap - 7-methyl guanosine added to the start of a primary transcript to protect it from digestion in the cytoplasm and to bind it to the ribosome as part of the initiation of translation
Poly-A tail - a string of 200 to 300 adenine base pairs at the end of an mRNA transcript
Exon - segments of DNA that code for a part of a specific protein
Intron - noncoding region of a gene
Spliceosome - particles made of RNA and protein that cut introns from mRNA primary transcript and joins together the remaining coding exon regions
mRNA transcript - mRNA that has been modified for exit out of the nucleus and into the cytoplasm
Reading frame - one of three possible phases in which to read the bases of a gene in groups of three
Powered by