E3. demonstrate an understanding of the anatomy and physiology of human body systems, and
explain the mechanisms that enable the body to maintain homeostasis.

E3.3 describe the homeostatic processes involved in maintaining water, ionic, thermal, and acid–base equilibrium, and explain how these processes help body systems respond to both a change in environment and the effects of medical treatments (e.g., the role of feedback mechanisms in water balance or thermoregulation; how the buffering system of blood maintains the body’s pH balance; the effect of medical treatments on the
endocrine system; the effects of chemotherapy on homeostasis).

E2.1 use appropriate terminology related to homeostasis, including, but not limited to: insulin, testosterone, estrogen, nephron, dialysis, pituitary, synapse, and acetylcholine [C]

Students will be able to:
The Menstrual Cycle

Here is an overview of the steps that occur, mainly highlighting the secretion and regulation of certain hormones that occur during the menstrual.  The chart compares the steps between a female who is ovulating regularly vs. a female who is on the birth control pill (an oral contraceptive) 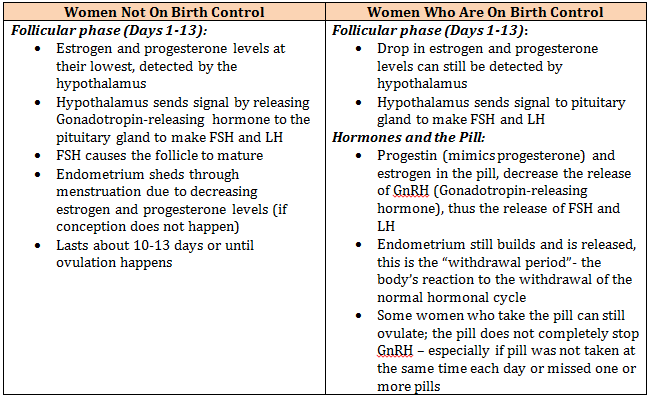 Now that you have had a chance to see the steps in chronological order, please observe this chart which allows you to see the patterns of the increase and decrease of the hormones.  The graph also depicts the growth of the follicle and the growing and shedding of the endometrium. 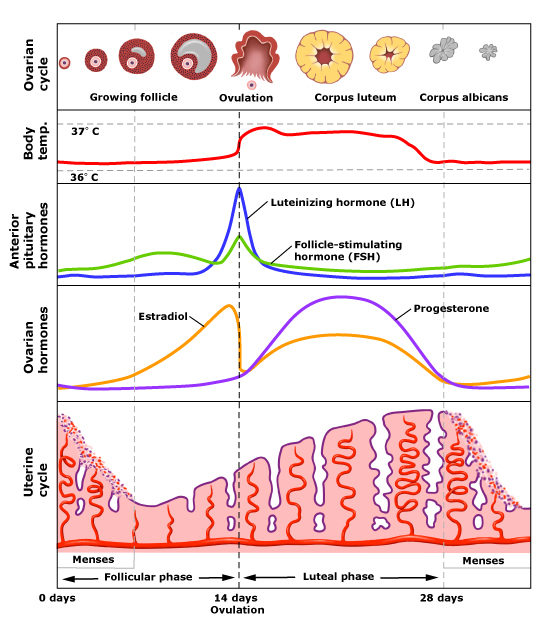 Now on a more "sequential" manner of pre-cursors and regulators, please observe this flow chart of the steps of the menstrual cycle which shows you which hormones in the pathways turns on or off other hormones.

Here are some interesting videos you may consider watching to see the menstrual cycle occur in a more "3D" manner!
Test your knowledge with the following assessment tests!

Corpus Luteum - The dominant follicle which is a major anatomical part of the female reproductive system turns into the corpus luteum during the ovulatory phase after the egg is released from the ovary.

Dominant Follicle - A anatomical part of the body that develops in one of the ovaries usually around one week prior to ovulation and it assists the ovary in releasing the egg.

Endometrium - This is the inner membrane of the female's uterus.  It sheds and thins when levels of progesterone and estrogen decrease in the menstrual cycle if conception does not occur.

Follicle-Stimulating Hormone (FSH) - This hormone is produced by the pituitary gland during the menstrual cycle.  A female's body produces the highest amount of FSH right before the egg is released and ovulation occurs. This hormone also causes the dominant follicle to mature.

Hypothalamus - This is an anatomical function that lies in the brain, it is right below the thalamus (therefore, "hypo"-thalamus) and right above the brain stem.  It plays an extremely important role in the endocrine system and nervous system whereby it is responsible for sensing signals, creating hormones and regulating other hormone production.  The hypothalamus is closely related to the pituitary gland will send signals to this gland to increase or decrease the production of certain hormones.

Lutenizing Hormone (LH) - SImilar to Follicle-Stimulating Hormone (FSH), LH is also produced by the pituitary gland.  As well, a female's body contains the highest amount of LH just immediately prior to ovulation and the egg is released.  In males, LH is responsible for regulating the amount of testosterone produced and therefore the production of sperm.

Progesterone - In conjunction with estrogen, progesterone is also a steroid hormone that is sensed by the hypothalamus at the start of the menstrual cycle.

Progestin - This is a man-made hormone that is commonly found in birth control pills. It has properties that are similar to the natural hormones found in the human body called progesterone.  There are many variations of progestin which is why there are many different types of birth control pills, also known as oral contraceptives.  This hormone assists in the processes that suppresses ovulation and tricks the ovary into thinking it has released an egg.

“The 14 Steps of the Menstrual Cycle flashcards”:

“The Menstrual Cycle and Ovulation”: