C3. demonstrate an understanding of the chemical changes and energy conversions that occur in metabolic processes.

C1.2 assess the relevance, to their personal lives and to the community, of an understanding of cell biology and related technologies (e.g., knowledge of metabolic processes is relevant to personal choices about exercise, diet, and the use of pharmacological substances; knowledge of cellular processes aids in our understanding and treatment of mitochondrial diseases [a group of neuromuscular diseases]) [AI, C]

C2.2 conduct a laboratory investigation into the process of cellular respiration to identify the products of the process, interpret the qualitative observations, and display them in an appropriate format [PR, AI, C]

C3.4 describe, compare, and illustrate (e.g., using flow charts) the matter and energy transformations that occur during the processes of cellular respiration (aerobic and anaerobic) and photosynthesis, including the roles of oxygen and organelles such as mitochondria and chloroplasts

NOTE: Doing "nothing" and being alive is still doing something. Metabolic processes are still active! 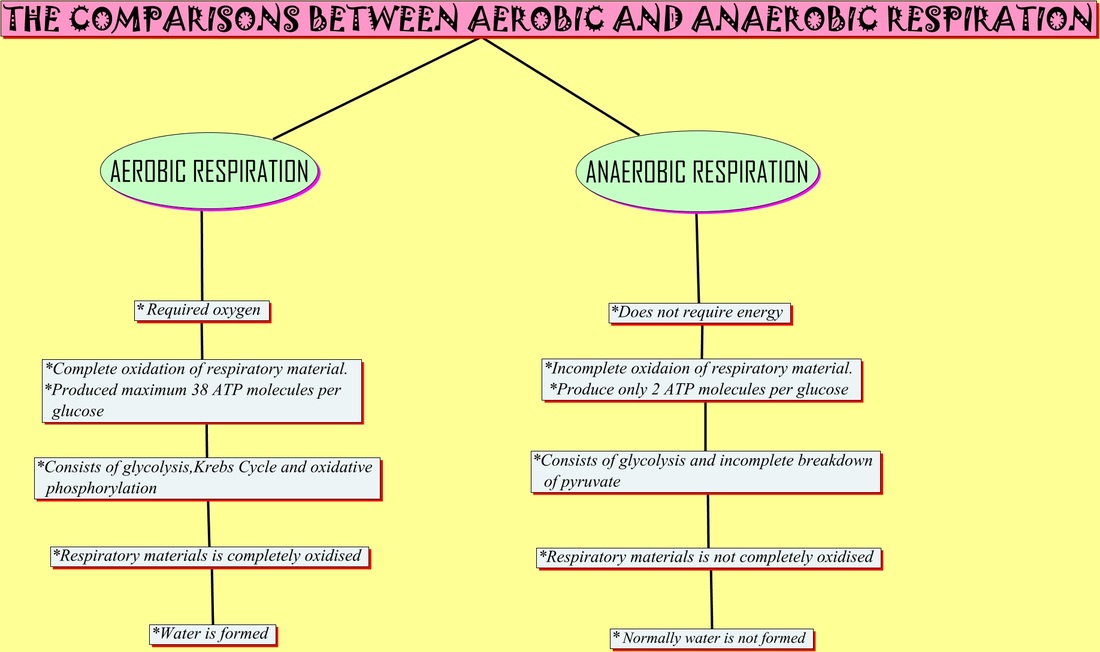 The process of aerobic versus anaerobic respiration

Cellular respiration is the set of the metabolic reactions and processes that take place in organisms' cells to convert biochemical energy from nutrients into adenosine triphosphate (ATP), and then release waste products. It is one of the key ways a cell gains useful energy.

The sugar molecules stored in the food are broken apart through enzyme-mediated reactions and the energy released is absorbed by cells. This process is much more effective in the presence of oxygen through aerobic respiration.

Aerobic respiration requires oxygen in order to generate energy (ATP). It is the preferred method of pyruvate breakdown from glycolysis and requires that pyruvate enter the mitochondrion in order to be fully oxidized by the Krebs cycle. The product of this process is energy in the form of ATP (Adenosine Triphosphate), by substrate-level phosphorylation, NADH and FADH2.

Anaerobic and aerobic respiration share the initial pathway of glycolysis but aerobic metabolism continues with the Krebs cycle and oxidative phosphorylation. The post glycolytic reactions take place in the mitochondria in eukaryotic cells, and in the cytoplasm in prokaryotic cells.

Without oxygen, pyruvate is not metabolized by cellular respiration but undergoes a process of fermentation. The pyruvate is not transported into the mitochondrion, but remains in the cytoplasm, where it is converted to waste products that may be removed from the cell. This serves the purpose of oxidizing the hydrogen carriers so that they can perform glycolysis again and removing the excess pyruvate.

The Krebs cycle (also known as the citric acid cycle, or the tricarboxylic acid cycle) is a series of enzyme-catalysed chemical reactions, which is of central importance in aerobic respiration. The citric acid cycle is part of a metabolic pathway involved in the chemical conversion of carbohydrates, fats and proteins into carbon dioxide and water to generate a form of usable energy. Other relevant reactions in the pathway include those in glycolysis and pyruvate oxidation before the citric acid cycle, and oxidative phosphorylation after it. Therefore, carbohydrates break into sugar and then into ATP. The overall process of aerobic respiration can be understood by the following reaction.

Why would animals undergo aerobic and anaerobic respiration? what are some problems?

An anaerobic process is a process that uses metabolism without air, while an aerobic process is a process that uses metabolism with air. For instance, in closed environments, yeast will undergo anaerobic respiration due to the lack of availability of oxygen. In humans during exercise when energy is in high demand but low levels of oxygen are present, the body will go through anaerobic respiration to generate more ATP. However, we will also produce lactic acid.

When you exercise, sugar is broken down into different chemicals, to produce energy for muscles. As long as you get all the oxygen you need, the final products are carbon dioxide and water, but if you exercise so vigorously that you can't get the oxygen that you need, the reactions stop, causing a chemical called lactic acid to accumulate in your muscles and spill into you bloodstream.

Lactic acid makes the muscles more acidic which causes them to hurt and burn and interferes with their ability to contract, so you feel tired. When lactic acid causes your muscles to hurt, you breathe harder and faster, and slow down to catch up with your oxygen debt. This converts lactic acid into carbon dioxide and water that are blown off as you breathe. Blood levels of lactic acid lower and your muscles stop hurting. A pace that you can hold breathing fast and deeply, but not gasping for breath, is called the lactic acid threshold and is the training level for most competitive athletes. 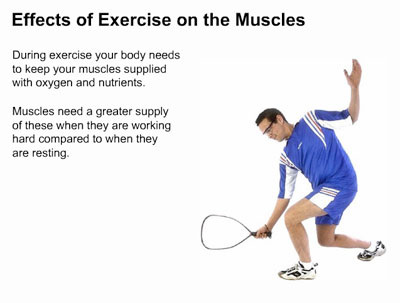 Adenosine triphosphate (ATP): a nucleoside triphosphate used in cells as a coenzyme.  ATP transports chemical energy within cells for metabolism.

Cellular respiration: metabolic reactions and processes that take place in the cells of organisms to convert biochemical energy from nutrients into adenosine triphosphate (ATP), and then release waste products.

Glucose: simple monosaccharide sugar that is an important carbohydrate that cells use as a primary source of energy

Mitochondria: membrane-enclosed organelle found in most eukaryotic cells, described as the “cellular power points” because they generate most of the cell’s supply of ATP. 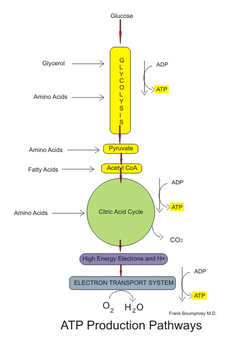 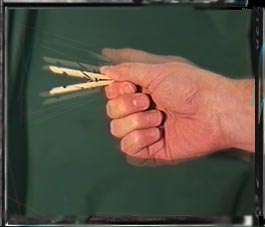 Yeasts are eukaryotic micro-organisms classified in the Fungi and have about 1500 known species. They are dominant fungi in the ocean. Yeast is a micro life form or an organism which similar to your muscles can respire in two forms. We will see some of the features of this in this simple experiment. The indicator Janus Green B will change its colour depending upon the quantity of oxygen available. If the yeast is to be left within a sugar liquid for a few days, a typical smell is produced. This is the result of ethanol getting collected in the mixture. The process in which the yeast turns sugar into ethanol is called fermentation.

Oxygen present: Indicator is oxidised to a blue colour
Oxygen absent: The indicator is reduced to a pink colour.

1. Put the 20 cubic cm of glucose solution in some of the yeast added in a test tube. Add 2 drops of indicator solution to it. The colour developed will indicate the presence of oxygen in the mixture.
2. Add some quantity of liquid paraffin over the mixture to form a layer exactly over the top surface. This layer will stop additional oxygen from the surrounding to enter the mixture.
3. Immediately after the colour of the mixture indicates that there is no oxygen preset in the mixture, fix up the delivery tube causing a little amount of bicarbonate/indicator in the other test tube.
4. Prepare and install a suitable control. Remember that in this experiment you are trying to learn if the yeast will respire in the absence of oxygen.
5. Leave the apparatus as it is for ten to twenty minutes and then record your observations.

1. Record the results in the form of a table (prepare a table for this purpose).
2. Describe the control you have used briefly.
3. Complete the following questionnaire.

2. What is your conclusion from the two answers to the question above?
3. Why is a layer of liquid paraffin used during the experiment?